You are here: Home / Fantasy / Worlds of Exile and Illusion

“Le Guin writes in quiet, straightforward sentences about people who feel they are being torn apart by massive forces in society–technological, political, economic–and who fight courageously to remain whole.” ―The New York Times Book Review

“As good as any contemporary at creating worlds, imaginary or our own…Le Guin writes with painstaking intelligence. Her characters are complex and haunting, and her writing is remarkable for its sinewy grace.” ―Time Magazine 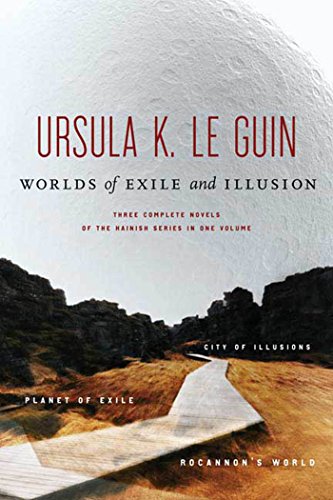 Worlds of Exile and Illusion: Three Complete Novels of the Hainish Series in One Volume–Rocannon’s World; Planet of Exile; City of Illusions

Ursula K. Le Guin was one of the greatest science fiction writers and many times the winner of the Hugo and Nebula Awards. Her career as a novelist was launched by the three novels contained in Worlds of Exile and Illusion. These novels, Rocannon’s world, Planet of Exile, and City of Illusions, are set in the same universe as Le Guin’s groundbreaking classic, The Left Hand of Darkness.

Ursula K. Le Guin (1929-2018) was the author of more than three dozen books for children and adults, including her groundbreaking novels The Left Hand of Darkness and The Dispossessed, both honored with Nebula and Hugo awards for best novel. She was also awarded a Newbury Honor for the second volume of the Earthsea Cycle, The Tombs of Atuan, and among her many other distinctions are the Margaret A. Edwards Award, a National Book Award, and additional Nebula and Hugo awards. Her other books include The Eye of the Heron, The Word for World is Forest, and the Hainish series. In 2014, Le Guin was named the Medalist for Distinguished Contribution to American Letters by the National Book Foundation.