You are here: Home / Dystopian / The Reader

“This story is incredibly original and really intense! Overall I would say that this is one of the books to watch, and I predict it will be huge!”  NetGalley Reviewer 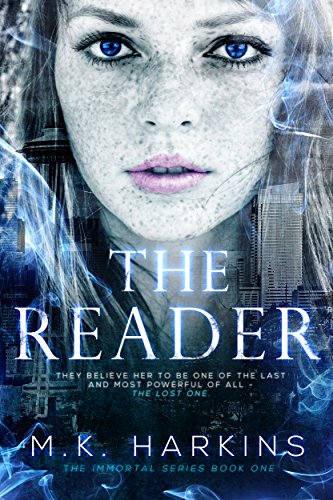 The Reader (The Immortal Series Book 1)

Ann, shot and dazed, watched two men running toward her.

Did she know them?

They acted like friends. More shots fired.  Now wasn’t the time for her to figure things out. Down the beach they ran. The fog of her memory made it all seem unreal. What was she getting into? Who was chasing them?

Ann’s life might never be the same. For weeks she healed, but still, the memories were gone. All she knows about the world is the hidden compound built into a large mountain, and it’s clear there’s something going on. There are rumors about who she might be. Is she truly The Lost One, or is it all a con? She has no idea.

Her story is just beginning.

Is Ann a guest or a prisoner?

You’ll devour this Paranormal adventure because everyone loves a battle against the odds.