You are here: Home / Best Sellers / The Immune Omnibus Edition

“Chilling and compelling, David Kazzie has created a masterful story of love, loss, and survival. The characters come alive on the page and, with his elegant writing, Kazzie keeps them hanging on, but barely, and you will be hanging on with them until the very end. This is a powerful story, wonderfully told.” –Mark Pryor, author of the bestselling Hugo Marston mystery series.

“The character development is amazing, and you find yourself rooting [for] and hating characters in equal measure along the way, as they scramble their way through life and fight to save, or find their humanity. This book is a riveting read, and although lengthy, it has enough in it to keep you reading right till the end. Very sad at times, thrilling and chilling in others, I would heartily recommend this book.” –Kindle Book Review

“If you like Stephen King’s The Stand, you’ll love this book!” – Goodreads reviewer 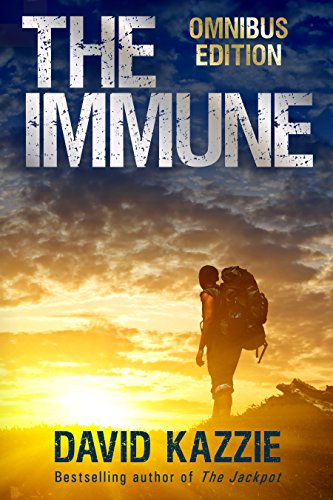 The Omnibus Edition contains all four parts of The Immune series.

THIS IS THE WAY THE WORLD ENDS.

On a warm summer night at Yankee Stadium, a monstrous plot to eradicate the human race is set into motion.

Dr. Adam Fisher watches helplessly as the deadly Medusa virus sweeps the globe, wiping out humanity in a matter of weeks while he remains inexplicably immune.

As Adam and his fellow survivors struggle amid the growing panic and lawlessness, he discovers a flicker of hope that will send him on a quest through a world unlike any he has ever known.

He joins forces with Sarah Wells, a soldier harboring a terrible secret, and Freddie Briggs, an aging football star grieving the loss of his family.

As they trek across a ruined American landscape, the challenges mount around them, including a dangerous new enemy that threatens their fragile existence.

Check out Book II of The Immune series:
The Living: https://tinyurl.com/me3ztqf

David is a novelist and lawyer in Virginia, where he lives with his family. He is the bestselling author of The Jackpot, which was a No. 1 legal thriller on Amazon. He is also the creator of a number of animated short films, which have more than two million hits on YouTube and were featured in the Huffington Post, the Washington Post, and the Wall Street Journal.