You are here: Home / Adventure / The End of the World 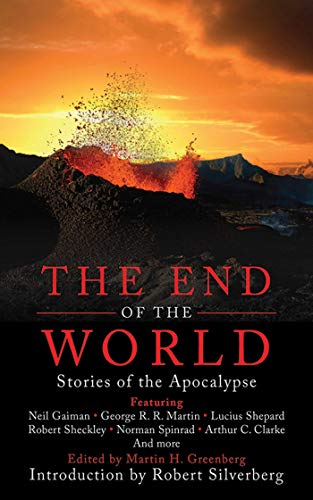 The End of the World: Stories of the Apocalypse

Before The Road by Cormac McCarthy brought apocalyptic fiction into the mainstream, there was science fiction. No longer relegated to the fringes of literature, this explosive collection of the world’s best apocalyptic writers brings the inventors of alien invasions, devastating meteors, doomsday scenarios, and all-out nuclear war back to the bookstores with a bang.

The best writers of the early 1900s were the first to flood New York with tidal waves, destroy Illinois with alien invaders, paralyze Washington with meteors, and lay waste to the Midwest with nuclear fallout. Now collected for the first time ever in one apocalyptic volume are those early doomsday writers and their contemporaries, including Neil Gaiman, Orson Scott Card, Lucius Shepard, Robert Sheckley, Norman Spinrad, Arthur C. Clarke, William F. Nolan, Poul Anderson, Fredric Brown, Lester del Rey, and more. Relive these childhood classics or discover them here for the first time. Each story details the eerie political, social, and environmental destruction of our world.