You are here: Home / Adventure / The Enclave Defend and Delay

After the country collapses only a few pockets of civilization remain. Most of what’s left is controlled by the Adelanto. The Enclave has survived but it’s now the Adelanto’s next target. And the Adelanto always burn everything to the ground, take the strongest away as slaves, and kill everyone else. 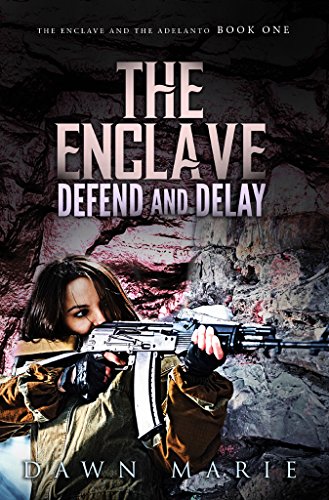 FIRE, DEATH, AND DESTRUCTION.
EVERYONE TAKEN AWAY AS SLAVES.
THE ADELANTO ARE COMING AND THE ENCLAVE IS IN THE WAY.

A young girl named Tiff is thrown into the fight when the Adelanto attack the field hospital she’s working at and her friend is taken away as a slave. But what can Tiff do? Even with some help from her friends? Maybe not much, but she’s going to try. Desperate to save The Enclave and her way of life, Tiff and her friends do whatever it takes to Defend and Delay the oncoming Adelanto attack.

…One girl’s fight to save her way of life…

Dawn Marie is a true Southern Belle, born with an abundance of beauty, charm, and intellect – raised to be a respectable, yet powerful woman full of love, kindness, and honesty.

She was born and raised in Birmingham, Alabama, and attended the University of West Alabama. She still lives in the city with her husband of 30 years and their Flat-Coated Retriever named “Misha”. They have 3 sons who are all either graduates or current students of Auburn University.

Dawn Marie has always had an affinity for children and works as a substitute school teacher in grades K through 3. She’s also been the Percussion Mom for the high school band for the last four years where everyone calls her “Momma Dawn.”

Dawn Marie has always had a love and interest in writing and her favored characters are strong, intelligent, powerful young women. Her stories are often true, always fun, and definitely adventurous, all delivered with just a hint of exaggeration, showing real people in real situations.