You are here: Home / Adventure / Star Rider on the Razor’s Edge

Star Rider on the Razor’s Edge delivers it all: rounded characters, strong plotting, and plenty of romance.

Star Rider on the Razor’s Edge had me from page one! It has the perfect combination for quality entertainment — I didn’t want to put it down but I also didn’t want it to end! 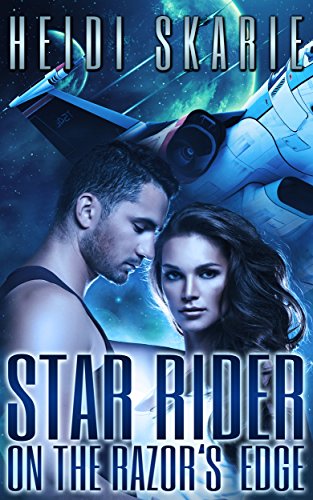 Star Rider on the Razor’s Edge

Her latest spy mission is to overthrow General Bhandar, the despot of Jaipar, who’s being controlled by Samrat Condor, a mighty sorcerer and interplanetary conqueror. And Samrat Condor isn’t about to loosen his stranglehold on Jaipar.

.
Toemeka is only too aware of Condor: she remembers the time his space fleet destroyed her home planet, killing her family while she barely escaped with her life.
.
Toemeka must preserve her cover, despite secretly taking on many side operations that threaten to derail her primary mission. Her main work of creating a shield-destroying oscillator prototype is a key to winning the conflict. However her overbearing boss Commander Rochambeau disrupts her and pressures Toemeka daily with thinly veiled bullying tactics: either become his mistress or face certain death at the hands of Condor.
.
Michio Kimes, a handsome spiritual warrior training to battle sorcery, seriously complicates Toemeka’s mission. Her only hope of surviving these tremendous odds lies with her trusted Coalition partner Erling Fenian and their rogue team, who band together with the local underground resistance in the fight to free the people of Jaipar and restore the rightful heir to the throne.

Heidi Skarie lives with her husband Jim and cat Lucky in Minnetonka, a suburb of Minneapolis.  She has three grown children and two grandsons. Star Rider on the Razor’s Edge is her first Science fiction novel and the first book of a series.
She have also written Red Willow’s Quest, the story about a Native-American maiden training to become a medicine woman. And Annoure and the Dragon Ships about a young woman kidnapped off the coast of what is now England by the Vikings. Her novels are an exciting blend of action, adventure and romance that feature strong, spiritually inquisitive heroines.  When Heidi is not inventing characters and putting them in dangerous situations, she enjoys other creative outlets such as blogging, gardening, knitting, oil painting and teaching writing classes.
Readers can contact Heidi by email at heidi.skarie@gmail.com or visit her website at heidiskarieauthor.com