You are here: Home / Adventure / Off Planet

“The strongest point for me was the characters, and especially the main character and narrator of the story as it is written in the first person: Maité Martinez. Her voice is unique and strong from beginning to end, developed and full of layers and complexity. I felt for her at every turn, and related to her a lot. She’s a three-dimensional character, with her secrets and contradictions, and she felt real, which I loved. Whether it be her thoughts, or dialogue, the writing gave her a great sense of realism and I loved following her journey through her eyes.” – Tempest of Books 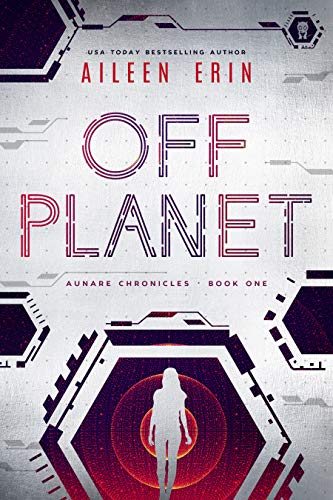 “In this bleak world, one spark of hope soon turns into an inferno. And just like a fireball, once this story is ignited, it just doesn’t stop.” — Maria V. Snyder, New York Times bestselling author of Navigating the Stars.

In an all-too-plausible future where corporate conglomerates have left the world’s governments in shambles, anyone with means has left the polluted Earth for the promise of a better life on a SpaceTech owned colony among the stars.

Maité Martinez is the daughter of an Earther Latina and a powerful Aunare man, an alien race that SpaceTech sees as a threat to their dominion. When tensions turn violent, Maité finds herself trapped on Earth and forced into hiding.

For over ten years, Maité has stayed hidden, but every minute Maité stays on Earth is one closer to getting caught.

She’s lived on the streets. Gone hungry. And found a way to fight through it all. But one night, while waitressing in a greasy diner, a customer gets handsy with her. She reacts without thinking.

Covered in blood, Maité runs, but it’s not long before SpaceTech finds her…

Arrested and forced into dangerous work detail on a volcano planet, Maité waits for SpaceTech to make their move against the Aunare. She knows that if she can’t somehow find a way to stop them, there will be an interstellar war big enough to end all life in the universe.

There’s only one question: Can Maité prevent the total annihilation of humanity without getting herself killed in the process?

USA Today bestselling author Aileen Erin is half-Irish, half-Mexican, and 100% nerd—from Star Wars (prequels don’t count) to Star Trek (TNG FTW). She reads Quenya and some Sindarin, and has a severe fascination with the supernatural. Aileen has a BS in Radio-TV-Film from the University of Texas at Austin, and an MFA in Writing Popular Fiction from Seton Hill University. She lives with her husband and daughter in Los Angeles, and spends her days doing her favorite things: reading books, creating worlds, and kicking ass.

Aileen is proud to announce her new YA space opera series Aunare Chronicles, beginning with Off Planet. On a polluted Earth where only corporations hold sway, Maité Martinez is the daughter of an Earther Latina and a powerful Aunare man, an alien race that SpaceTech sees as a threat. When tensions turn violent, Maité finds herself trapped on Earth and forced into hiding.

Her fans call her stories “jaw dropping,” “electrifying,” “amazing,” and “bloody brilliant.” Bloggers say “Erin’s world-building is excellent and her characters are big and bold”(Escape Into Worlds) and every book is “a magnet that just keeps pulling until you feel as if you are falling down, down, down right into its world” (Tempest of Books). Aileen Erin is the founder and CEO of Ink Monster, building worlds filled with girl power and happy endings. You can find her at www.inkmonster.net/aerin/ or on twitter @aileen_erin.