Impeccable world-building and a cast of compelling, heroic characters you will root for in a nail-biting mix of adventure, science, and survival. One of my favorite reads this year!
– Jennifer Echols, Award-Winning Author
“Breakneck pace, an intricately and tightly woven story line set in an exciting new world. I look forward to the next book, and yes there has to be a next book!”
– Roger, Goodreads reviewer

“The tale is woven expertly and the story enthralled me so deeply that I didn’t want to put the book down until I reached the end, and still yet I kept looking for more.” 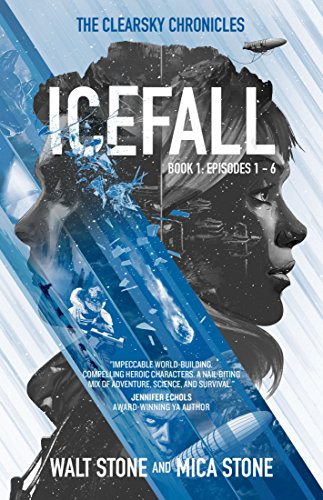 In the equatorial strip of Earth’s only habitable land sits the island of Cerebus. Their ruling council has governed what remains of the world since the Icefall. Now their stronghold is in jeopardy; to maintain power, they must quash a centuries-old plan to shatter the ice cloak blocking the sun. But rebel forces based on impoverished Earthland have infiltrated the fortress and are intent on completing the mission to save the frozen planet… no matter the cost.

Genetically engineered Odessa is headed for her first MEDcadet assignment on Earthland until she witnesses Cerebus security murder her anatomy professor. Inexplicably linked to the crime, she finds herself on the run for her life, a fugitive marked for death.

Reynal Krolik’s STEM education sets him apart from most Earthlanders but also makes him a threat, as does his role in the rebellion. When he answers Odessa’s cries, his actions put the insurgency at risk. Suddenly he’s a target with a price on his head.

With no choice but to join Rey on his quest, Odessa’s torn between loyalty to her leaders and newfound sympathy for the rebels. Soon, everything Rey and Odessa thought they knew is called into question—Who can I believe? Who can I trust?—while Earth’s fate hinges on the life-and-death choices they make.

ICEFALL contains the first six episodes of THE CLEARSKY CHRONICLES, an epic science fiction adventure which takes place two hundred years after a cloud of galactic water-ice passes through Earth’s solar system, flooding the planet, and leaving behind a dark cloud in orbit blocking the sun’s rays. Under this chilling shroud, the land and the seas of Earth have frozen.
This post-apocalyptic tale unfolds over two weeks on and inside the mountains of South America
Walt and Mica are busy writing the next six episodes of this eighteen episode trilogy.
This is Walt’s debut novel. It’s Mica’s sixtieth.