A war was brewing within our borders.
Not a war with weapons, but one with words.
Until now. And so it begins … 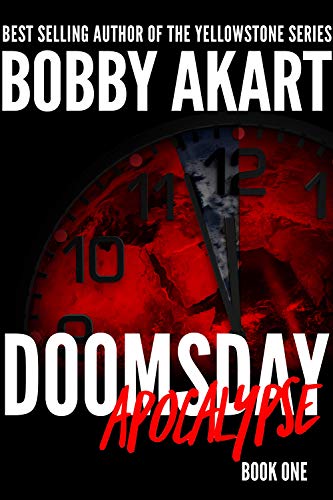 From critically acclaimed author, Bobby Akart, Doomsday, a new post-apocalyptic survival thriller, is a gripping series of America on the edge of societal collapse.

In Doomsday: Apocalypse, book one of the Doomsday series, it was New Year’s Eve. As the ball dropped in Times Square, Americans were preparing for a new year and a bright future. Instead they found themselves fighting for their lives as the fuse had been lit that sent the country into chaos.

With a nation on edge, the war of words escalated, and a political war erupted. Americans were caught in the crosshairs of societal unrest and a shadowy group stoking the fires of discontent burning in America. Words were replaced by weapons as neighbor turned on neighbor, and powerful forces stopped at nothing to reshape a nation in turmoil.

America had become embroiled in something more than a clash of ideologies. She now faced a battle in which the blood of patriots and tyrants would be shed.

As Americans struggled to survive, they sought a place of safety where they could ride out the coming storm. However, even if they can overcome the threats confronting them, will they bear witness to an America hell-bent on destroying itself?

This is a story of a nation divided, and what that portends for our future. Remember, all empires collapse eventually, and America will be no exception.

OTHER BOOKS IN THE DOOMSDAY SERIES

OTHER BOOKS BY THE AUTHOR