You are here: Home / Fantasy / Destruction of Sweet Creation

“I absolutely love Destruction of Sweet Creation by Kenneth E. Fultz Jr. It is a truly magical tale. It makes you realize that maybe teens are as old as they think they are. Being a teen myself, it was a very enlightening story. Who would have thought that a story like this could make a teen realize that maybe we are immature punks who need to remember that we are still just kids who don’t know everything. I thank the author for sharing this amazing story. Maybe one day it will become the anime movie it was meant to be. If it does become one, I would gladly pay to see it.”-Savannah Edelen (Teen Reviewer) for Readers’ Favorite 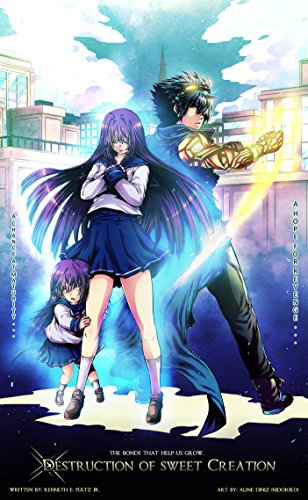 In a world of magic and technology, a boy is after revenge, and a girl must break the spell her own mother cast upon her.

Hiro, an elite member of AURA an organization that specializes in magic in the current era, sees no reason to not give up his life in any situation that comes up. Kanae, a happy, yet childish, girl who only has basic magical skills sees the world almost like a Fairy tale. These two unlikely teens find themselves crashing into each other’s lives as Hiro comes closer to finding the man who took away his family, and Kanae a helpless romantic thought to be a child in everyone’s eyes due to her mother’s curse.

These two are brought together when a monster attacks Kanae. The once gloomy and empty Hiro starts to see value in his life as Kanae does some serious growing up; however, when Hiro comes closer to getting his hands on the man responsible for his emptiness will he throw everything else away to get him, and does Kanae know what it truly means to have a relationship, a mature one instead of just some fantasy?