You are here: Home / Archives for Adventure “You could call [Pierce] Brown science fiction’s best-kept secret. In Morning Star, the trilogy’s devastating and inspiring final chapter, . . . he flirts with volume, oscillating between thundering space escapes and hushed, tense parleys between rivals, where the cinematic dialogue oozes such specificity and suspense you could almost hear a pin drop between pages. His achievement is in creating an uncomfortably familiar world of flaw, fear, and promise.”—Entertainment Weekly 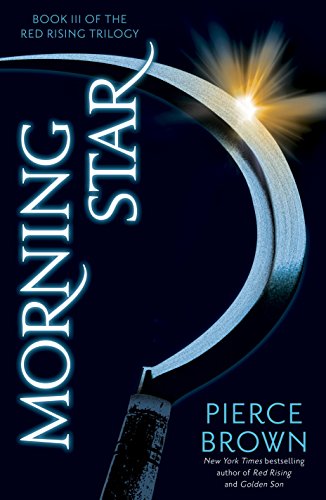 #1 NEW YORK TIMES BESTSELLER • Red Rising thrilled readers and announced the presence of a talented new author. Golden Son changed the game and took the story of Darrow to the next level. Now comes the exhilarating next chapter in the Red Rising Saga: Morning Star.

Darrow would have lived in peace, but his enemies brought him war. The Gold overlords demanded his obedience, hanged his wife, and enslaved his people. But Darrow is determined to fight back. Risking everything to transform himself and breach Gold society, Darrow has battled to survive the cutthroat rivalries that breed Society’s mightiest warriors, climbed the ranks, and waited patiently to unleash the revolution that will tear the hierarchy apart from within.

Finally, the time has come.

But devotion to honor and hunger for vengeance run deep on both sides. Darrow and his comrades-in-arms face powerful enemies without scruple or mercy. Among them are some Darrow once considered friends. To win, Darrow will need to inspire those shackled in darkness to break their chains, unmake the world their cruel masters have built, and claim a destiny too long denied—and too glorious to surrender.

“There is no one writing today who does shameless, Michael Bay–style action set pieces the way Brown does. The battle scenes are kinetic, bloody, breathless, crazy. Everything is on fire all the time.”—NPR

“Morning Star is this trilogy’s Return of the Jedi. . . . The impactful battles that make up most of Morning Star are damn near operatic. . . . It absolutely satisfies.”—Tordotcom

“A page-turning epic filled with twists and turns . . . The conclusion to Brown’s saga is simply stellar.”—Booklist (starred review)

FREE on Kindle until October 2nd.

STUNNING! Having read the author’s four books, from his “Necropolis” and “Underworld” series, I was keen to read this illustrated guide. It proved very helpful in keeping my head around which character was from which book as there are some overlaps. And it was also nice to read the easy explanation of their background and function outside of the narrative of the books. Needless to say, the illustration were stunning and the author has been generous enough to share with us, at the back of the book, how he made them. Overall, this short book is a work of art. – Amazon Review The Underworld:
The Fantasy Realms of Penn Fawn

The Underworld, The Fantasy Realms of Penn Fawn, 1st Edition, is a compilation of graphic art meant to introduce readers to the dark fantasy world and novels of the author, although those already familiar with his work may delight in seeing the characters they’ve read about for the first time.

The realms feature both the heroes, heroines, and villains, and the exotic places featured in his published novels, plus a couple of those that are yet to be released. Expect to find images of gargoyles, angels, plus other mythological figures and dark and exotic locales on the pages inside.

The publication is the size and length of a standard comic book. With just twenty-eight pages, it’s a concise companion guide for those who may be curious about the author’s other books, while simultaneously being a breeze to get through.

Penn Fawn, a graphic arts production artist with a research and writing background is a New Yorker. He is the author of the dark fantasy duology, Necropolis, and the spin-off series, The Underworld.

His novels are an amalgam of epic fantasy, dark fantasy, and horror. Executive: A Guide to Becoming a Pirate Queen

Bryce Virra was a corporate executive in charge of the New Eden mining colony. But when a group of terrorists learn about her illegal weapons research, they decide to put a stop to it by sacrificing her to a demon. It doesn’t go well.

Now, with her captors dead and her secret out, Bryce can no longer rely on the corporation that was protecting her from a dark past. She’ll need to find a ship, form a crew, and learn to navigate the galaxy’s criminal underworld in order to survive.

But first she needs to negotiate a deal with the devil who was summoned to kill her. A deal that could change both of their lives forever.

This novel is the published version of my free web novel available here: https://www.royalroad.com/fiction/54915/a-guide-to-becoming-a-pirate-queen NAMED ONE OF THE BEST BOOKS OF THE YEAR BY NPR, BUZZFEED, AND BOOKLIST • “Gripping . . . On virtually every level, this is a sequel that hates sequels—a perfect fit for a hero who already defies the tropes. [Grade:] A”—Entertainment Weekly

As a Red, Darrow grew up working the mines deep beneath the surface of Mars, enduring backbreaking labor while dreaming of the better future he was building for his descendants. But the Society he faithfully served was built on lies. Darrow’s kind have been betrayed and denied by their elitist masters, the Golds—and their only path to liberation is revolution. And so Darrow sacrifices himself in the name of the greater good for which Eo, his true love and inspiration, laid down her own life. He becomes a Gold, infiltrating their privileged realm so that he can destroy it from within.

A lamb among wolves in a cruel world, Darrow finds friendship, respect, and even love—but also the wrath of powerful rivals. To wage and win the war that will change humankind’s destiny, Darrow must confront the treachery arrayed against him, overcome his all-too-human desire for retribution—and strive not for violent revolt but a hopeful rebirth. Though the road ahead is fraught with danger and deceit, Darrow must choose to follow Eo’s principles of love and justice to free his people.

He must live for more.

“Stirring . . . Comparisons to The Hunger Games and Game of Thrones series are inevitable, for this tale has elements of both.”—Kirkus Reviews

“Brown writes layered, flawed characters . . . but plot is his most breathtaking strength. . . . Every action seems to flow into the next.”—NPR