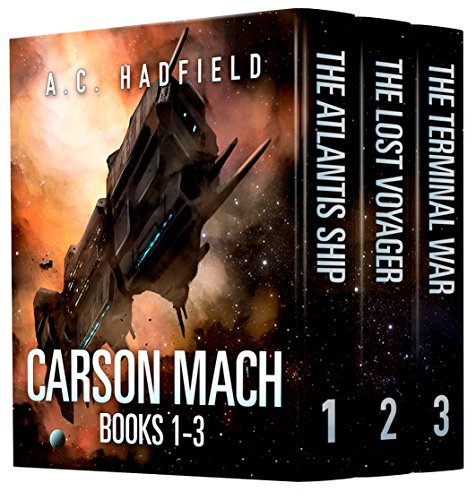 Unless one man can find and stop the Atlantis ship

Carson Mach, a former war hero turned freelancer, seeks the biggest payday of his life when he’s tasked to hunt down a ghost ship that has echoed through the centuries. The legendary Atlantis ship has become a reality, appearing at the Commonwealth frontier, and obliterating an orbital station.

Facing a lack of resources, a ragtag crew, and aliens who want him dead, Mach must use all his leadership skills and experience if he’s to beat the overwhelming odds.His mission will take him across the galaxy and to uncharted dark areas of space.

Failure to stop the Atlantis ship will not only mean the death of Mach and his crew, but the end of the Commonwealth and all of humanity. Somehow, Mach must find a way to solve an ancient mystery if he’s to succeed where everyone else before him has failed.

Its precious cargo could change the galaxy…

Unless one man and his crew can find the lost Voyager.

Carson Mach, a freelance rogue captain, and his crew are faced with a seemingly routine mission to find and rescue the Voyager, a missing mining ship in a remote system. Only he and his employers know what the lost ship carries in its cargo hold and the devastating consequences if it falls into the wrong hands.

On arrival to the Noven system, the destination of the Voyager, Mach and his crew have three planets to explore, with no clues as to where the ship and its artefact might be. Their first stop reveals a terrifying new enemy has joined the search, raising the stakes considerably.

If the new threat finds the cargo, it will place the entire galaxy in a perilous position from which it won’t recover. Mach and his crew must overcome impossible odds and defeat the new enemy if they’re to reach the Voyager and save the lives of trillions.

A millennium into the future.

In a galaxy far from Earth.

We were not prepared for the Terminal War.

Billions of lives are at risk as enemy forces mass on the frontier of the Commonwealth. If the planet Terminus, the center of all the Commonwealth’s technology, falls, we will lose everything, and there will be no way back.

The Axis Combine’s fleet is overwhelming in number, and their firepower is superior.

Unless one man and his crew can save Terminus, the galaxy will never be the same again. They must find a way to give the Commonwealth an edge or we’ll face complete annihilation.

There is but one hope: Carson Mach and his motley crew of rogues on the starship Intrepid.