In a society in which death has been rendered practically obsolete, suicide and murder take on different significances. After a particularly brutal offing, former UN envoy Takeshi Kovacs finds himself “resleeved”–that is, his consciousness has been put in a new body–and hired as a private investigator by Laurens Bancroft, one of twenty-fifth-century society’s old rich in Bay City (formerly San Francisco). Bancroft claims he was murdered, but the police say it was a suicide. After Kovacs gets hit at his hotel within hours of being resleeved, he sees the possibility that Bancroft was, in fact, murdered, and that someone wants to keep it very hush-hush. As he investigates, he uncovers a far-reaching conspiracy with ties to the most unsavory characters in his generally unsavory military and criminal past. This far-future hard-boiled detective story is a lovely virtual-reality romp distinguished by a conspiracy whose strands have the potential to generate several successful sequels, which is just what its publicity promises. Regina Schroeder
Copyright © American Library Association. All rights reserved 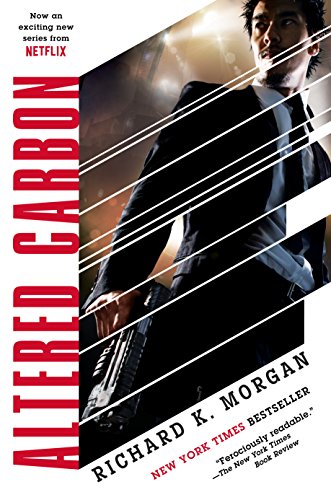 NEW YORK TIMES BESTSELLER • NOW AN EXCITING NEW SERIES FROM NETFLIX • The shell that blew a hole in his chest was only the beginning in this “tour de force of genre-bending, a brilliantly realized exercise in science fiction.”—The New York Times Book Review

In the twenty-fifth century, humankind has spread throughout the galaxy, monitored by the watchful eye of the U.N. While divisions in race, religion, and class still exist, advances in technology have redefined life itself. Now, assuming one can afford the expensive procedure, a person’s consciousness can be stored in a cortical stack at the base of the brain and easily downloaded into a new body (or “sleeve”) making death nothing more than a minor blip on a screen.

Ex-U.N. envoy Takeshi Kovacs has been killed before, but his last death was particularly painful. Dispatched one hundred eighty light-years from home, re-sleeved into a body in Bay City (formerly San Francisco, now with a rusted, dilapidated Golden Gate Bridge), Kovacs is thrown into the dark heart of a shady, far-reaching conspiracy that is vicious even by the standards of a society that treats “existence” as something that can be bought and sold.

“Gritty and vivid . . . looks as if we have another interstellar hero on our hands.”—USA Today