This great little book will keep you turning the pages until the very end. It is a spellbinding and timely parable that is beautifully written. 2084 features a host of memorable characters. They are all confronting a dysfunctional political landscape that could evolve from the divisions of 2017. It was a rollicking read, and I am eager for the next novel by this gifted author. 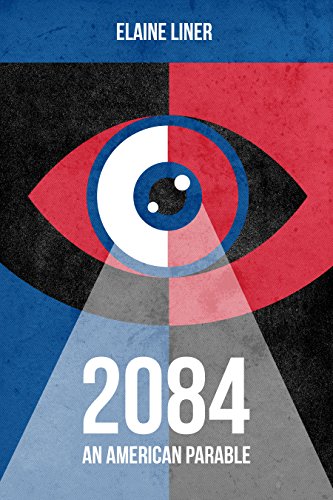 In America 2084, young Waring Foster lives in the nation’s capital, writing upbeat slogans for the Bureau of Encouragement. With privacy and education in peril from an extremist government, she risks arrest for committing a serious SinCrime: reading books from the past.

Author Elaine Liner pays tribute to George Orwell’s prescience, with a bit of Ray Bradbury, Rod Serling and Paddy Chayefsky in the mix of dystopian YA fiction and satire – with a twist you’ll never see coming.

In Jesus City (formerly Washington, D.C.) everyone lives and works under new laws that make wanting things a crime. Hunger is a SinCrime. Romantic love, unless your partner has been chosen by The Supreme Church, is a SinCrime. Not taking Mana is a SinCrime. But so is taking too much Mana (and there are lots of people taking more than they are supposed to). Expressing joy is a SinCrime unless you are at a Church rally for President Rex Evangeline.

Until she found her father’s hidden trove of old books, 21-year-old Waring Foster floated through life wondering when her parents would return, if ever, and doing all the things one had to do not to attract attention from SinCops. It is a lonely way to live. But then she begins to read. She shares her secret library with her only friend, Winton Nesmith. But should she trust him?

Author Elaine Liner is woke, says the Dallas Voice. “She’s politically savvy and trenchant in her Cassandra-like pronunciations, which coalesce in the intentionally referential novella 2084. She even subtitles it An American Parable, as if to shake readers by the shoulders to say, `I’m not kidding here!! PAY ATTENTION!'”